We use cookies to ensure that we give you the best experience on our website. We adhere to the GDPR and EU laws and we will not share your personal information with or sell it to third-party marketers. If you continue to use this site we will assume that you are happy with it. Our privacy policy Cookie policy

1. Free access to completed solved  board exam questions from past years.

2. Solutions that provide other accepted alternative answers to the questions.

3. Clear guidelines on answering questios by keeping you well informed of all the answers "not accepted by cambridge"

4. The ability to work without a tutor's help

5. Students my request for the questions to be solved, giving complete reference of ther year and the past paper questions, so that we may be able to offer timely help. Email: [email protected]

Also Please do not forget to visit our sites membership area to understand the features of our specially designed paid resources as well.

Please Note: All answers have been typed in blue colour and special hints in red

1 All commercial breeds of sheep belong to the species Ovis aries.

(a) Define the term species.

The Merino is a breed of sheep that is farmed mainly for its wool. The wool is very thick and is made of lots of very thin hairs. Fig. 1.1 shows a female Merino sheep with her newborn lamb.

(b) The presence of hair is a feature that is only found in mammals.

State two other features that distinguish mammals from all other vertebrates.

(c) Merino sheep in South Africa have high quality wool with very thin hairs. Breeders in New Zealand have used selective breeding programmes to improve the wool of their sheep to match the quality of South African wool.

Describe the steps that breeders would take to breed sheep that have wool with very thin hairs.

Please note:In the above answer , instead of cross-breeding, artificial insemination or IVF was also stated to be accepted.

Natural selction differs from  selective breeding in the following ways:

2 The rate of photosynthesis of terrestrial plants can be determined by measuring the uptake of carbon dioxide.

(a) Explain why plants take up carbon dioxide during photosynthesis.

(b) The rate of photosynthesis of parts of individual leaves can be measured using a hand-held device as shown in Fig. 2.1. 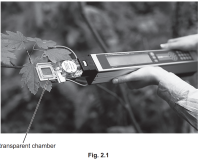 This apparatus allows air to flow through the transparent chamber that encloses part of the leaf. The apparatus measures the carbon dioxide concentration of the air entering and leaving the chamber. Explain how the results from the apparatus can be used to calculate the rate of photosynthesis.

Subtract the concentration of carbon dioxide at the end from the concentration at the start.Then divide  it by the time (taken) { or per unit time] . Though we need to know  that the carbondioxide levels may vary due to the rate of respiration, as plants respire continuously.

(c) A student used the apparatus shown in Fig. 2.1 to investigate the effect of temperature on the rate of photosynthesis of the leaves of Chinese plantain, Plantago asiatica, at two different concentrations of carbon dioxide, A and B. Fig. 2.2 shows the results of the investigation. 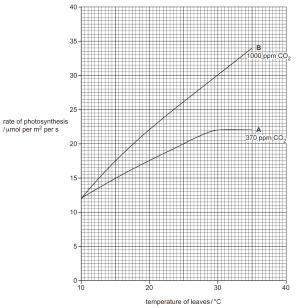 (i) State one environmental factor that should have been kept constant in this investigation.

Other acceptable answers:Water supply or humidity

(ii) Describe the effect of temperature on the rate of photosynthesis when carbon dioxide concentration A was supplied. Use the data from Fig. 2.2 in your answer.

The rate of photosynthesis increases  between 100 to 300 and reaches a pleatue  at 300. [or levels off/ stays constant]

(iii) Calculate the percentage increase in the rate of photosynthesis at 30 °C when the carbon dioxide concentration was increased from A to B as shown in Fig. 2.2. Show your working and give your answer to the nearest whole number. .

(iv) Explain the effect of increasing temperature on the rate of photosynthesis for carbon dioxide concentration B. Use the term limiting factor in your answer.  [3]

The temperature is the limiting factor over whole range. When the  temperature increases, the  kinetic energy / KE, of molecules  also increases. This further increases the  rate of diffusion of carbon dioxide into the  leaf. The temperature also influences [ of  affects the activity of)  the enzymes.  There are now more effective collisions between  the substrate molecules and  the enzymes  in the plant). More enzyme-substrate complexes are  formed  and  more carbon dioxide is  fixed [ or  used in photosynthesis  or  converted into sugar. carbon dioxide  Thus the concentration  is not   limiting .

(v) The student concluded that carbon dioxide concentration is the factor limiting the rate of photosynthesis between 30 °C and 35 °C for the results shown for A in Fig. 2.2. State the evidence for this conclusion.  B shows that the  rate of photosynthesis is higher [ or it  continues to increase] , if the carbon  dioxide is increased [1]

(d) A similar investigation was carried out on Arizona honeysweet, Tidestromia oblongifolia, that grows in Death Valley in California where the highest temperatures may be greater than 45 °C. 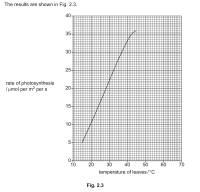 Predict and explain what would happen to the rate of photosynthesis if the investigation is continued at temperatures higher than 45 °C.

Prediction:The rate of photosynthesis, remains constant [or decreases or slows  because the  enzymes [or the  active sites] , are denatured at high temperatures. .The  stomata close, so, little [or  no], carbon dioxide can enter leaves . the plant is adapted to survive at high temperatures

3 (a) Complete the five sentences about the eye and the nervous system.

Structures in the eye change the shape of the lens so that the eye can focus on near and distant objects. This is called accomodation. The radial and circular muscles in the iris of the eye are a pair of  antagonistic muscles that work against each other. Muscles in the eye are controlled by the nervous system. The peripheral nervous system contains only sensory and motor neurones. The optic nerve from the eye contains sensory neurones that conduct impulses to the brain .

Explain how ions are moved across membranes by active transport.

The movement of ions involves the  proteins pumps [ Or  / pumps in the  neurone membrane. ; Ions such as sodium ions named bind to the  protein pumps [ or carriers ]  to move the  ions  against  the concentration gradient from  a low  concentration to a  high concentration  using energy [3]

Many drugs interfere with the action of neurotransmitters at the junctions between neurones. Two drugs that influence the transmission of impulses between neurones are atropine and eserine. The actions of these drugs are shown in Table 3.1.

Explain the effects of these two drugs on the nervous system using the information in Fig. 3.1 and Table 3.1.

The neurotransmitters move across the synapse  [ or  gap / junction .The atropine neurotransmitter cannot bind to [ or  enter  or reach]  to the receptors . Therefore no impulses  travel along the next  postsynaptic,neurone. Hence   no impulses reach the CNS .This means there is no sensitivity to stimuli [ or  feels no pain ] hence there is no, contraction of muscle [ or no response ]. It acts as a depressant ;The eserine neurotransmitter stays in the  synaptic gap . This  neurotransmitter can bind to the  receptor ,rather than just  stay in  the synapse. This continuously stimulates the, next [ or the  postsynaptic neurone] . A sa result, more impulses are sent in the postsynaptic, neurone..There is a contraction of  the muscle [ or there is a response ] Hence it acts as a ; stimulant  [6]

(d) A scientific paper was published in 1997 that described the effects of anabolic steroids on female athletes. Many of these athletes achieved great success in international sport competitions during the 1960s and 1970s. Discuss the arguments against the use of anabolic steroids in sport.

4 (a) Table 4.1 shows four structures associated with the human male reproductive system. Complete Table 4.1 by identifying the level of organisation of each structure. Choose your answers from the list.

(d) Sperm and eggs each have a nucleus which is haploid.

(i) Define the term haploid nucleus. [1]

(ii) State the number of chromosomes in a human haploid nucleus. [1]

(i) Plasminogen is found in the plasma. State what is meant by the term plasma.  [1]

(ii) State the products of the action of protease on the protein fibrin. [1]

TPAs can be produced by genetically-engineered bacteria. Fig. 5.1 shows some of the stages involved in genetically engineering a bacterium to make a TPA.

(ii) In the flow chart, X represents the action of an enzyme on a molecule of DNA. State the name of this enzyme.  [1]

(v) The genetically-engineered bacteria produce mRNA that is a copy of the human TPA gene. Explain the role of mRNA in the bacterium. [2] [Total: 10]

6 Fig. 6.1 shows some cells from the shoot tip of an onion, Allium cepa

(ii) Cell A is dividing by mitosis. State the role of mitosis in a shoot tip.  [1]

(b) The area labelled M is a mitochondrion. Explain why mitochondria have an important role in dividing cells. [3]

(c) Cells just behind a shoot tip absorb water and grow in length. A plant hormone stimulates cell elongation and controls the response of stems to gravity.

(i) State the name of the plant hormone that stimulates cell elongation in stems. [1]

(ii) Explain how the response of stems to gravity is controlled. .[4] 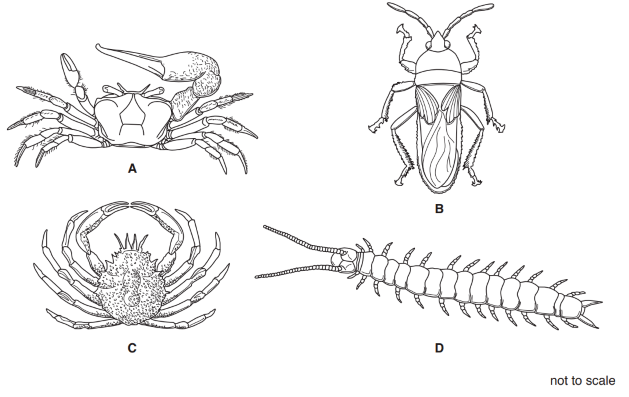 (i) State two features, visible in Fig. 1.1, that are common to all arthropods.

Complete Fig. 1.2 by writing suitable statements in: • box 2 to identify species B • box 3 to separate species C and A.

body, has five sides / is angular

How would you rate this course overall?